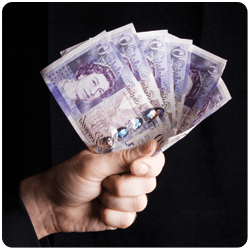 The financial rewards for working at a leading banking institution are substantial, with six-figure incomes attainable before you reach your thirties. Read on to learn about the rewards culture in the banking sector.

The jobs are competitive. The work is demanding. It naturally follows that the rewards of the banking industry are among the most lucrative in the world.

According to the High Fliers Annual Review of Graduate Vacancies and Salaries 2015, graduates entering investment banking can expect to receive a starting salary in the region of £45,000 – far greater than the national average. High Fliers report that banking and finance salaries increased by 9% this year which translates to about £3,000!

The benefits across the finance sector are substantial, with year-end bonuses often outpacing basic salaries. Many top investment banks operate a meritocratic culture, where staff are rewarded in proportion to work put in or results achieved.

Bonuses typically start at a fraction of basic salary – between 20% and 70% for entry-level front office roles, falling to 5-10% for back office functions – but these percentages climb with career progression. In front office roles, bonuses often increase exponentially, with the senior-most staff known to cap their years off with up to 300% of their salaries.

The other customary benefits may seem slight in comparison, but they still make for attractive furnishings to reward packages. They can include low-cost travel season ticket loans, the option to buy additional holidays and subsidised staff restaurants or gym memberships.

However, it is especially important for graduates to note that the annual salary provided by an employer is not the actual amount paid into a bank account each month. There are a number of payments that will be deducted from a monthly salary including student loans, national insurance and tax.

Once a graduate secures a job within this industry, they will start to pay back their student loan. GOV.UK states that if a graduate started university before 1st September 2012, they will only start repaying their loans when their income is over £17,335 per annum. If they started after this date, these monthly payments will be deducted when their annual salary is over £21,000. The way in which this is calculated means that the more an individual earns above a certain threshold, the more they will have to pay back each month.

There are lots of tools out there such as the RBS salary calculator that can help an individual understand their actual take home salary in more detail such as salary calculators which allow graduates to calculate their take home pay after these various payments have been deducted.

For further insight into the distribution of salaries across some front office roles, take a look at the table below, it gives details of the average salaries attached to key positions, and shows the curve of salary maturity as you progress in your career plus potential bonus percentages.